St. John, the smallest of the three U.S. Virgin Islands, retains a tranquil, unspoiled beauty uncommon in the Caribbean or anywhere else in the world.

Settled in the early 1700’s by Danish immigrants attracted to the island’s potential as a sugar cane producing colony, St. John soon blossomed into a thriving economy.

The island’s unspoiled forests and stunning beaches attracted the attention of wealthy families who sought privacy and tranquility on the island. In 1956, Laurence Rockefeller was so moved by the island that he bought and donated broad expanses of land to the National Park Service to keep St. John “a thing of joy forever.” More than 800 plant species grow in hilly tropical forests that drop down to beaches bordered by coral reefs. The National Park Service added even more federally owned submerged acres in 2001 to create the underwater Virgin Islands Coral Reef National Monument.

St. John was voted “Best Island in the Caribbean/Atlantic” by the readers of Condé Nast Traveler in the publication’s prestigious annual Readers’ Choice Awards poll. 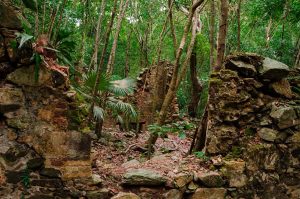 Cruz Bay, on the island’s western edge, is the main town where car and passenger ferries dock; the island has no airport but St. Thomas is only 20 minutes away by ferry. Day visitors can stroll through upscale boutiques and art galleries along the narrow streets and dine at alfresco restaurants. When you’re ready to explore the park, begin in Cruz Bay at the National Park Service Visitors Center. Park rangers lead a variety of weekly activities like the 3/4-mile Reef Bay Trail hike through sugar plantation ruins.

St. John is known for lovely beaches along the north coast and quieter ones to the south. At some you can rent water-sports gear and snorkel the coral reefs populated by colorful fish. Don’t miss the marked underwater snorkeling trail at Trunk Bay.